A thrilling time at Genting SkyWorlds My friend and I had a great time at Genting SkyWorlds. It is a theme park that opened on 8 February 2022, so it’s a fairly new theme park. It has nine different themed ‘worlds’ spanning across 26 acres.

We had to drive all the way up to the top – the cable car was closed, something we were unfortunately not aware of. The drive didn’t take that long anyways. We had to cross a bridge from SkyWorld Hotel to the entrance area of the actual theme park but it was very short, barely a five minute walk.

Going around with the ‘Genting SkyWorlds’ app

The park looked really cool and incredibly promising. We had to download an app called ‘Genting SkyWorlds’ which allowed us to book rides, view pictures of us taken by the staff, check current wait times and also see which rides were closed/open. My mum’s phone didn’t get the verification code that the app said it sent but it didn’t matter, since my friend’s mum got it and it worked just fine.

We also had to scan our thumbprints before we entered so we could use that if we lost our ticket, which showed that this park was planned pretty well. (MakanMama: face recognition and fingerprints didn’t sit well with me but we were already there and had already bought tickets. Security issues anyone?!).

The amazing Samba Gliders… and more!

We asked what the most popular rides were so we could book those and the staff said that one of the most popular rides (at the moment) is the Samba Gliders. A very humble-looking roller coaster that sends you flying over the Rio area (and a bit of Ice Age area), and I can see why it’s a crowd favourite. It was a short but very intensive ride with sharp turns, and reaching fast speeds. It was a good start to the park and it was very cool to ride it.

Moving on, there were many other rides open such as Sid’s Rock ‘N’ Slide in the Ice Age area, Alpha Fighter Pilots at Andromeda Base and many others. They all varied in terms of intensity such as the Sid’s Rock ‘N’ Slide being on the mild end of the spectrum and Alpha Fighter Pilots being at the intensive end of the spectrum so be careful when choosing which rides to go on if you have motion sickness, vertigo etc. (MakanMama: look at the signages at the entrance of each ride. It tells you the thrill level, or the intensity level).

After several rides, we ended up at an Italian restaurant named Trattoria IL Lago. We had pizzas and pastas. The food was pretty good. It was rather cold, since it was cloudy and I even had to put my sweater on. The water in the bathrooms is also really cold, so be prepared for that. The only place we ate there was at IL Lago, so I can’t speak for other food establishments in the park. A hot dog stand somewhere near the Independence Day ride smelled really good!

Fighting off a bunch of aliens

One other ride that stood out from the rest is the Independence Day ride. It isn’t really a ride; more like an interactive theatre experience. At first, it seemed that it was just going to be a show; there was this alien animatronic in a plastic box which looked really cool and realistic. But then, we boarded the ‘spaceship’ which made us feel like we were genuinely flying in the air. There were even water effects and wind effects. It’s a bit like the Shrek 3D Ride at Universal Studios Singapore (if you’ve been), but it was a lot better. I won’t spoil the storyline for you (and I also forgot quite a huge chunk of it) but it’s basically us fighting off a bunch of aliens in space, which was quite fun.

There isn’t really any true interactive stuff; we sit there and just experience the space chases, but it makes you feel like you’re actually flying. (MakanMama: whilst waiting to ‘board’ the ‘spaceship’ you’re brought into a holding area of sorts where a crew member lets you know what you’re supposed to do on the mission. Unfortunately we couldn’t follow along as English is clearly not her first language. So be prepared and just go with the flow. The ride was definitely an experience and enjoyable).

Rides closed due to rain

Sadly, it started to rain after the Independence Day ride, meaning that we had to not only leave the park early, but we got soaked in the process, even though we had purchased and were wearing disposable raincoats. A lot of the rides were closed due to the rain, since most of them are outdoors and there isn’t really much to do if the majority of the operable rides are closed. Rides like the carousel and Independence Day that were indoors kept running.

Of course you don’t need to spend the whole day at the park; you could go to indoor park Skytropolis in the afternoon or even go to the Premium Outlets if it rains, but experiencing the entire park would most likely take a whole day. (MakanMama: when it poured, parts of the pavements got flooded and we got our sneakers wet. If you don’t like squelchy sneakers – who does?! – perhaps consider hiking shoes?!)

Overall, the park is amazing. The rides were great fun and the whole feel of the park screamed good planning and high-quality entertainment. I’m no expert in theme park management, but I’ll gladly compare this place to Universal Studios in Singapore or Disneyland any day, since I think it matches the same quality. But it is important to note that a lot of the rides aren’t ready yet. This is because the park is in a soft opening phase, meaning that many rides are actually still under construction. So it may be a good idea to wait it out until the park is fully open. More info here on their FB page.

This article was written by Caleb. The 12-year-old son of MakanMama was so eager to write about Genting SkyWorlds, he just couldn’t wait to share his experience. Great job, Caleb! A fun day out: Lost of World of Tambun 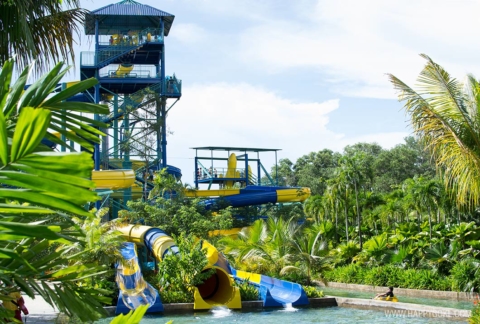 5 things to do on a Genting Highlands trip Ripley’s Believe It Or Not at Genting Highlands