Adventure of a lifetime at an Iban longhouse in Sarawak My mum had been talking about proboscis monkeys since the day she heard we would be moving to Malaysia. When they came to visit us the first time, it went without saying that we would try to see these beautiful creatures in the wild. We bought flights to Kuching and started planning our five-day trip in the mysterious Borneo, including a visit to an iban longhouse.

I find it fascinating that there are so many indigenous groups in Malaysia, especially in Borneo. Hence it was clear that if I got to visit Borneo, I would want to know more about the people living there. Instead of just visiting Sarawak cultural village or Anah Rais Longhouse, both near Kuching, I was looking for a less-touristic, more authentic experience. Friends had visited Lemanak longhouse and as they had liked the trip, we wanted to go there as well.

We ended up booking the trip with an independent guide who (as we learnt later) was married to an Iban. He knew a lot about customs and history of the Iban people and could open the world of the people living in longhouses in a way some other tourist guide perhaps would not have been able to. We started our five-hour journey from Kuching to Lemanak longhouse early in the morning. We stopped at pepper plantations and a small village market, both very interesting. Pepper apparently brings a big part of the income for indigenous people here. At the market we tried and bought some local fruit, saw some dead pythons on sale and ate a delicious Iban lunch.

It is customary that people visiting longhouses bring some small presents with them, usually a big box of noodles etc. Our guide advised us what to buy at the market, and also bought all the food we would need while staying at the longhouse.

Altogether, the journey consisted of four hours of driving and one hour on a boat in the middle of the jungle. I was thrilled: we would finally see proboscis monkeys and other animals in the jungle. Little did we know! Apparently all the wildlife has vanished around the longhouses due to the noise and hunting. The forests in Borneo are enormous and animals are experts in hiding. 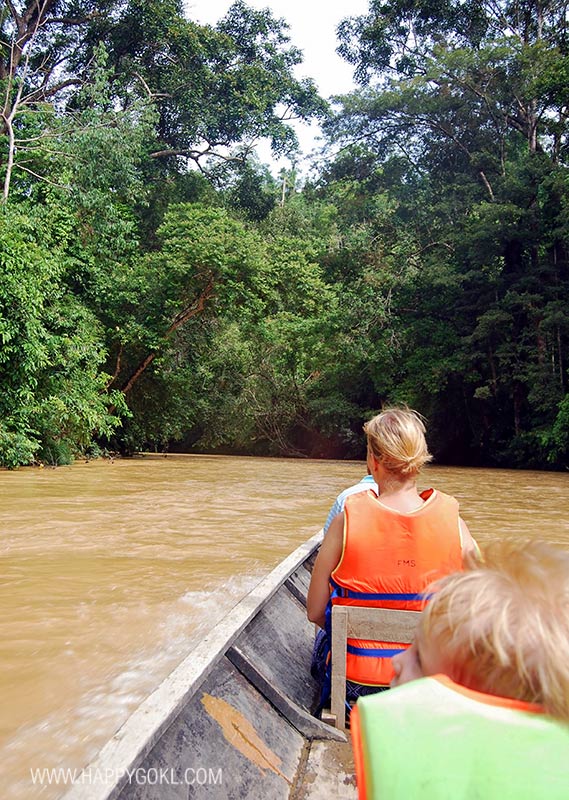 My parents’ boat came across a baby crocodile though, or at least that was what the boat drivers told us. It’s not impossible because the Bornean rivers are home to many crocodile species, including the deadly saltwater crocodile. We were lucky not to encounter one of those deadly beasts! 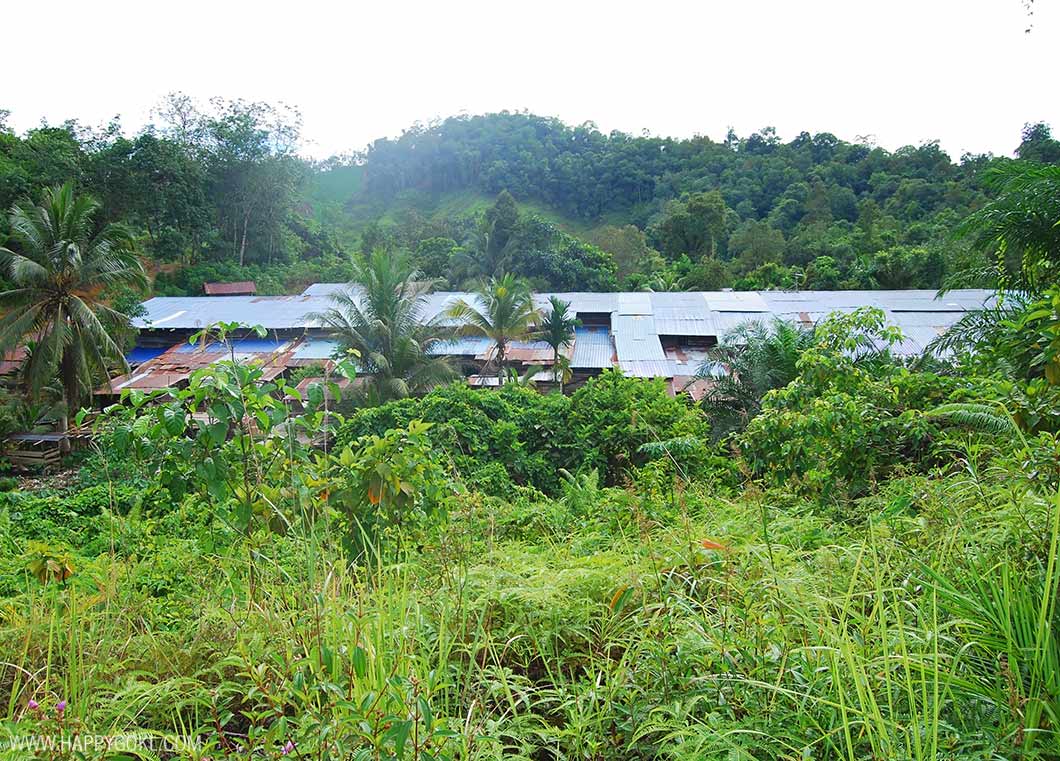 We finally arrived at the Lemanak longhouse. The gongs were played to welcome us and to inform the nearby longhouses of the guests. We were told that this was, and still is, a way to keep in touch with the neighbouring longhouses. The chief of the longhouse had a mobile phone, an iPad and a TV, but network was nowhere to be found. In addition to gongs, we were welcomed with a shot of homemade rice wine.

After the welcome ceremonies we just sat along the long corridor of the longhouse, watching women weaving rattan mats, rocking babies in swings made out of fabric and men making wood crafts and smoking cigarettes. Suddenly time started passing slower and all the hurry in the world vanished.

In the evening we were introduced to the chief and his family, had dinner sitting on the floor of their room and enjoyed dance performances by the teens of the longhouse. We were invited to dance with them, and learnt some traditional Iban dance moves – definitely a moment that I will never forget. While we were dancing, the residents of the longhouse prepared beds for us: mattresses on the floor in the corridor, covered with mosquito nets, light sarongs as blankets. The lights of the longhouse were switched off at ten o’clock. Nowadays longhouses have generators to produce electricity and the lights are on from 7pm to 10pm. There were only a few lights so the torches we had taken with us came in handy. My biggest fear was all the insects and other small creatures that would accompany us during the night but to my surprise we only saw one middle-sized beetle, that’s it.

Waking up to a morning in the jungle

After a humid night we woke up to the noises of the longhouse. In addition to the families living there, there were tens of cats, dogs, chicken and roosters. I think the rooster had it a bit wrong and started loud crowing already at 4am. Around 6 am the residents started going to work and it was the time for us to climb up from our mattresses and clean the beds away. After having breakfast in the chief’s room, we got to try out blowpipes. The Iban are known for their headhunting history and during the trip we heard many stories about tribal wars and the headhunting days. After a quick walk around the longhouse we started the five hour journey back to Kuching.

What to think of it all?

This trip took place in 2015 and I still quite often go back to those moments. The visit was indeed interesting, although we didn’t do much at the longhouse, just sat in the main area and observed the everyday life going on around us.

To be honest, my two kids (3 and 5 years old back then) were quite bored and it was agony to make sure they behave well. The whole visit also made me a bit uncomfortable – who am I to go to other people’s homes to gawk at their life? I felt like an intruder, seeking adventure in a place I don’t belong to. This was not because I felt that the people at the longhouse did not want us there, since it seems that tourism is an important source of income for them. That said, even though my initial idea was to find an authentic Iban longhouse I soon realised such a thing does not exist for tourists like us.

The Lemanak longhouse is, of course, authentic and people do go about their normal lives there. However, it was set up for tourists: you could buy souvenirs (some Iban handcrafts) and they had planned all these performances for visitors like us. As we were leaving, the next batch of tourists arrived. But I was not disappointed; the more you think about it the clearer it is that there are places for tourists to visit and then there are people’s homes – that are not for tourists.

I cannot tell you do or don’t visit longhouses. For us, maybe we could have visited Sarawak Cultural Village instead – it would have been easier with two small kids, we would not have had to sit 8+ hours in the car and we would not have felt like intruders or curious stalkers. And in the end, we would have had time to go somewhere like Bako National Park to see the proboscis monkeys that we desperately wanted to see in the first place. However, this definitely was an adventure of a lifetime that we will never forget! Some tips if you are planning to visit a longhouse with kids:

If you are visiting Kuching, you may be interested in this post about about seeing the orangutans.

Marjukka - or Mare, as everyone calls her - is a sustainability researcher by profession but has enjoyed life as a full-time mum after her third child was born in 2017. Sustainable lifestyle is close to her heart, hence the pen name Zenmama. You can even find a bokashi composting system in her backyard! She loves snorkeling, nature, essential oils, books and her new hobby, drawing and painting.

PrevPreviousTop 10 things to do in Kota Kinabalu with kids
NextParents in business: Serina of Kind KonesNext

Chinese New Year may feel a little different this year, so we’re here to help you bring that festive cheer to your home instead. Give…
Read more

With such a traditional name, one could easily be fooled into believing that this is a very old Chinese custom. But ask any Chinese person,…
Read more

Our trip to Yangshuo was lovely in every way but I am certain our excellent choice of hotel was what nailed it. After dragging the…
Read more

Just like the other travelers, we went to Xi’an to meet the terracotta warriors up close and personal. However, as a bonus we got a…
Read more

On Friday 23 April 2021 it is World Book Day! Officially named World Book and Copyright Day by UNESCO, it is a great opportunity to…
Read more

Who remembers kemahiran hidup (life skills) back in secondary school? I do. I never took to sewing nor cooking, but really enjoyed woodworking. What I…
Read more