Just like the other travelers, we went to Xi’an to meet the terracotta warriors up close and personal. However, as a bonus we got a long weekend in this fascinating, well-organised city with many interesting spots to visit.

What to do in Xian with kids

The city wall can be enjoyed on a gentle stroll or you can cycle around the 14 km wall. We hired tandem bikes from the organised rental place on the wall (with helmets for the kids). Our kids were too small to contribute to the cycling so in retrospect we should have turned back rather than finished the whole circle in the hot sun. It was fun, though. There are clean toilets along the way, regular kiosks that sell ice cream and drinks, and of course nice views across the city. Having read that this old trading quarter gets incredibly busy on weekend nights we came in the late afternoon. The streets were already getting packed with all kinds of food being prepared in front of our eyes – lots of it dishes that we had never seen before. Truly a fascinating walk! The 1300-year-old Big Wild Goose Pagoda is one of the most famous sights in town. Originally built in 652 during the Tang Dynasty, it was an important spot along the Silk Route and was a centre point for Buddhist scripts brought from India. Today the area includes temples and gardens as well as the imposing pagoda, and is a nice place for a stroll. The square outside seems to come alive especially in the evening. There is a daily light show inside the complex, but we didn’t manage to catch it. The Small Goose Pagoda is not as famous, but we enjoyed our visit there perhaps more. It is more tranquil and when we visited on a Sunday morning, it was busy with local families and tourists. The kids were fascinated by the thousand-year-old, 10 tonne iron “morning bell chime” that used to mark the morning prayers at the Jianfu Temple but can now be rang by visitors. The Xian museum is on the grounds of the pagoda. We didn’t have the energy to visit, but instead spent time practising Chinese characters in the gift shop, and taking selfies with replica warriors and other quirky props in the Traditional Culture Exchange area near one of the entrances. Foreign tourists can get free tickets to Small Goose Pagoda by showing their passports at the ticket office. With our non-existent Mandarin we were too scared to enter the local eateries we passed but instead headed to the easy access dumpling house of De Fa Chang Restaurant in the city centre to try out the famous Xian dumplings. The kids were fascinated by the chick shaped bao and dumplings were enjoyed by all. During the trip we also sampled rou jia mo – Xian’s version of a burger, a flaky bread filled with shredded pork -and the yummy flat Shaanxi biang biang noodles. The boys of the family couldn’t resist the fried scorpions – they were reportedly crispy and covered in spices.

We stayed just a few steps away from this park so visited the lake and the nearby playgrounds a few times. One night we rented the four wheeled “lovers’ bikes” and pedaled along the path around the lake. The people in Xian must be incredibly fit – again we found ourselves completely exhausted after half an hour of cycling with these gear-less monsters and found ourselves gazing enviously towards the electric caddies ferrying people around. There is a monorail stop in the park, but nobody seemed to know when it operates – when we visited all the doors were locked. Obviously you are going to see them! We recommend hiring a guide. Read more tips for visiting the terracotta army here.

Other attractions in Xian:

We missed the mosque in the city – it is supposed to be one the most beautiful mosques in the world. We had planned a day trip to the Huashan mountain further away from the city but had to cancel due to bad weather. It is famous for the vertical plank walk but apparently makes for a nice day out with the kids even if you stick to the cable car to take you up and down. There are also a few museums in Xian for history buffs. Shaanxi opera would also be something to try with kids with a slightly longer attention span.

Whenever we are traveling in China, we make sure we ask the hotel to write down any attraction we want to visit in Chinese. Also having the hotel card handy makes getting home easier. In Xian we managed to hail taxis in town with varying degrees of success. On one occasion it was starting to look like we would never find a ride home, a lovely elderly lady pulled out her phone and ordered an Uber for us despite the fact that we had no common language. She had more English than we have Mandarin and refused any payment. We were touched by here farewell: “Welcome to China!”

We understand that foreign Uber accounts don’t work in China anymore but you better check this before you go. Where to stay in Xian with kids:

We stayed at the Gran Meliá but also considered the Citadines Central in the old centre with reasonable prices and big apartments, the Westin just across the lively Big Wild Goose Pagoda and the intimate iii House in the centre. 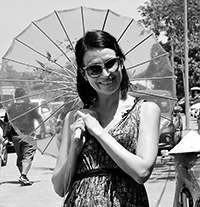 PrevPreviousOur favourite spas for massage in KL
NextPottery in KLNext