Bangalore is a vibrant city – an IT metropolis with heritage buildings and vast green pockets.  We spent three nights here over the Christmas holidays. It was chaotic and busy like most big Indian cities but there were pockets of charming little interludes and calming nooks. Definitely a city that grows on you and has something in store for everyone. What to do in Bangalore with kids? Lalbagh Gardens:  Lalbagh Garden is highly rated with many interesting birds and trees. The best way to get around is on the electric tram which is a 45 minute tour that provides a nice ride around the vast park. We stopped at the lake to take photos of the magnificent eagles that swooped low.  A leisurely few hours in the midst of nature is guaranteed. Don’t forget to take a picture at the Lalbagh Rock – a rock formation believed to be one of the oldest on earth.

Tippu Sultan’s Summer Palace: The two-storey fort is built entirely out of teak wood and adorned with pillars, arches and balconies. Affairs of the state were conducted here. Dating back to 1790, the palace was a good introduction to the children about Bangalore’s history from the time of Tippu Sultan’s father to the British occupation when it was used as the Colonial secretariat. 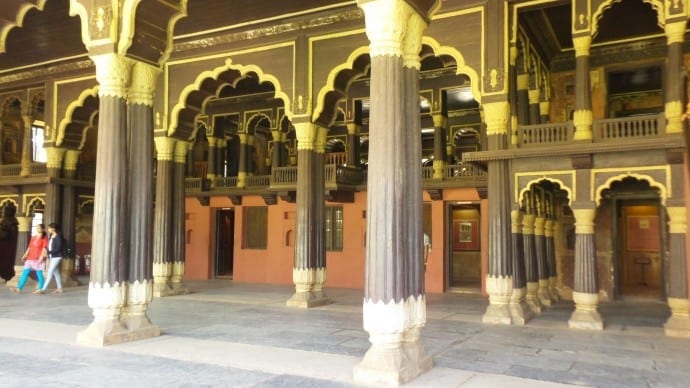 Cubbon Park : A vast expanse of rolling green, Cubbon Park is spread over 250 acres. It has a toy train and a children’s park to keep them busy on a sunny morning.  What I found more interesting were the neo-classical buildings nearby including the Government Museum and the Karnataka High Court. The state legislature building or Vidhana Soudha, also a few minutes away, is built in a grand Dravidian style architecture and a nice photo opportunity.

Bull Temple:  This interesting temple is dedicated to a 4.5 metre tall Nandi the bull, believed to be  the vehicle of Lord Shiva. This temple is one of the oldest in Bangalore and built by the founder of Bangalore, Kempe Gowda.

We wanted very much to join the Bangalore Walks which starts early near Ulsoor but they were on a break in December. Ah well, there is always a next time! Worth exploring will also be the cultural shows that dot the city, especially in the suburb of Whitefield which seems to be the local arts enclave.

Commercial Street and Brigade Road: The place to bag shopping bargains for your fashion everything and anything with its amalgamation of big stores and small, street side ones bearing  scarves, sarees, salwars, shoes and hundreds of textile options. Of particular interest are FabIndia that sources from rural artisans around the country using traditional craft techniques and processes with material like cotton, jute and silk and Soch which has a staggering selection of Indian kurtas and sarees.

Handicraft and carpet shops are also plentiful and the most popular ones are the government run handicraft shops that work with local artisans.

There are also some lovely bookstores with old world charm around MG Road like Higginbothams and Blossoms.  If you have no time, most shopping malls head to a Crossword which also house a reasonable amount of Indian literature apart from the regular books.

The ubiquitous Auto Rickshaws, the black and yellow three-wheeled cab are easily available and fast! The kids loved to jump into one. Otherwise taxis need to be called in advance or you can download an app for Ola Cab that will get you a comfy and metered ride in a jiffy. Picnic at Cubbon Park: Pack some sandwiches, find a quiet spot in Cubbon Park and don’t forget a Frisbee!
Browse for books at the fabulous Higginbotham’s which in itself is a historical icon.

Look for good home knick-knacks at stores like Eka in Jayanagar and Tarang in Indranagar.  Most large malls also have FabIndia and Pure Home+Living for a quick buy. If your budget allows, antiques and artefacts at Gangarams on MG Road are really lovely.

Try paneer in various ways. It is a lovely local cheese and the kids enjoyed it.

Beggars: Like most Indian cities, the stark disparity in wealth is quit staggering. Just outside UB City Mall with its rows of high-end boutiques, you will stumble upon beggars at the traffic lights. I had a conversation with the children on the child beggars on the streets and begging syndicates. They were quite upset when seeing all this first hand and it didn’t help that I told them that we best not to entertain them with their request. Perhaps keep some sweets with you which you can allow your children to distribute.

Short shorts: Bangalore is a very modern city where you get sights of latest in fashion trends but temples and religious places still require modest clothing.

Try to stay away from tap water and order bottled water like Kinley, Bisleri and Aquafina (as much as you worry about plastic and the environment, sick kids are the last thing you need on a trip).

Don’t underestimate Bangalore traffic. It is not only unpredictable but absolute chaos.

Be careful of auto drivers that recommend you to go to certain saree stores with great discounts – it’s a web of planned connivance. Jay is Happy Go KL’s Chaimama. She grew up in Taiping and Ipoh, lived in the UK and now calls KL home where she juggles being a mom, consultant and business-owner. As a working mama, she has her hands full juggling the businesses and the needs of her family. She loves the frantic pace but also enjoys all that the region has to offer, especially slowing down and travelling with children in tow.